Out smartphones contain some data which is quite private.

Lines are blurred between our public social media activities and our privacy. But there are some things we definitely would not share with our boss, our team or our customer / agency. Simply because they are private, because we want to be in charge of who gets to know these facts.

Amongst these private things, there are facts like: Where have I been? Which apps are installed on my smartphone? Especially if these apps might reveal some very personal interests, tastes or very private topics and conditions of personal life.

More or less regularly, our smartphones contain information which is absolutely private. There are holiday snapshots we have taken, apps, messages, and in the more recent past, there is also location history present on our phones. Anybody having access to our digital companion gets to know us really well.

If you happen to cooperate in running a common, maybe corporate, Twitter account with colleagues, business partners or subcontractors, you’ll probably want to check if the access your Twitter app has to your smartphone data is really an access you want to allow in its current extent. The reason is that your Twitter app might be collecting data which you currently do not think of. And, above that, any person who has access to the login data of a Twitter account which is enabled on your smartphone can easily take notice of the information collected by your Twitter app.

Twitter scans the presence other apps on our smartphones

In order to show us content which meets our interests, Twitter is scanning our smartphones and storing a list of apps installed on the device. This feature is called App Graph. It can be turned off in the Twitter app on our smartphone and in the Twitter Web app settings aswell.

Users who do not turn app graphing off and are not aware of Twitter’s hunger for very personal information might be surprised when checking their own data in the web based Twitter login area. Here, they will find a very detailed list of the apps which the Twitter client on their smartphone has found during its sniffing activities. Amongst the apps listed here, there can be all kinds of different stuff, maybe some public transport apps and other basic applications, but also items like dating applications by Lovoo or Tinder.

Now, the question is: Does this (Lovoo and Tinder, e.g.) really comply with what the company states concerning App Graph privacy?

“We’ve designed app graph to try and exclude apps that appear to be especially sensitive, such as ones dealing with your health, sexual orientation, or religious beliefs.”

If approved by the user, the Twitter App is scanning for and collecting the names of other apps on our smartphones. The results of this activity can be seen in Twitter’s member login area on the web. A fact that can rise some issues – because any coworkers who also have access to the same Twitter account can, of course, also see the full list of apps which were found.

Book workshop or webinar
It is not our intention to give a verdict on social media application’s practice to collect information about other apps residing on the same smartphone. And: Twitter is not the only company doing so. There are others, especially Google, who are doing the same thing – to give just one example.

On the one hand, the fact that a complete list of all apps Twitter has found by scanning our smartphones is presented in Twitter’s login area is some kind of transparency. This is, of course, a positive thing. On the other hand, this situation enables users with more knowledge to take a look at very personal information of colleagues who do not have as much awareness and knowledge about this possible privacy issue.

There is also a list of places we have been – Twitter is collecting them and displaying them within the Twitter login area.
When logged into Twitter, a detailed list of apps can be obtained. We have seen Twitter accounts with lists of more than 100 apps. It is not possible to directly see which user had installed which app. But with a bit of thinking and combining facts, it is not too hard to say who probably used them. Probably, the guy without hair was not the one installing the hairstyling application, right? And as your colleague alway uses LG smartphones, he probably was not the person installing the apps with the “Samsung” addon in their names. Nice.

Beyond that, Twitter delivers a lot of information on the places at which Twitter smartphone apps have been used. So don’t be surprised if your team mates do not ask where exactly you’ve been on holidays – but already know where you spent your time.

The settings can also be changed on the respective smartphone. 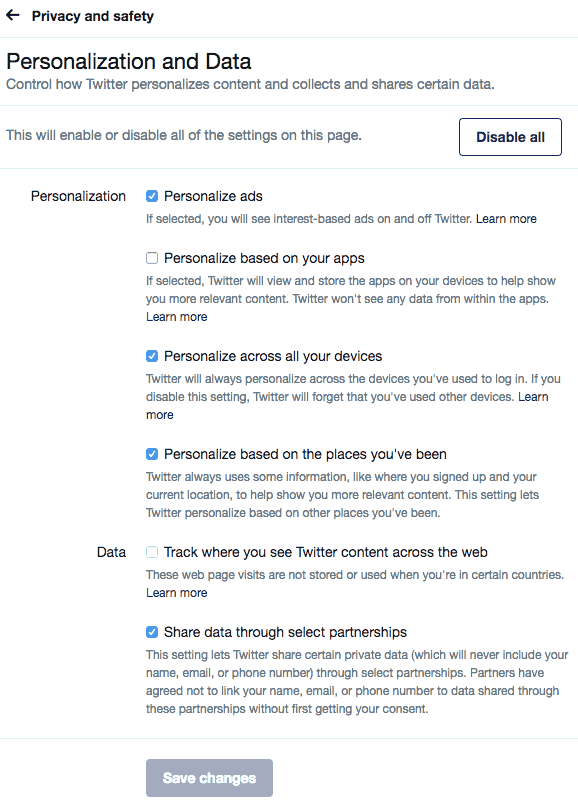 It is possible to switch off Twitter’s tracking in the menu “Personalization and data” (click to enlarge our screenshot).
Generally spoken, it should be considered that: